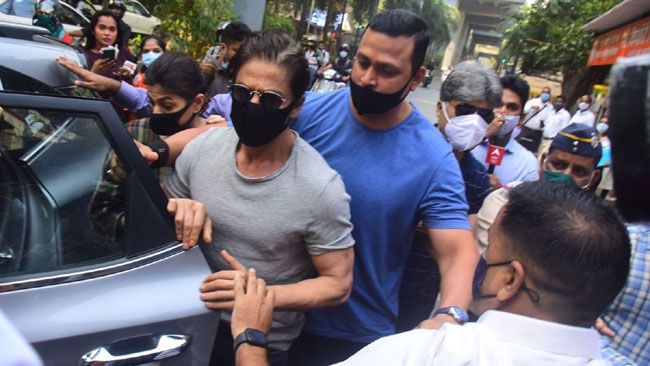 Son of Bollywood King Khan Shah Rukh Khan, Aryan Khan who was arrested in connection with the alleged rave party has been trying to get bail in the case. However, his efforts were in vain and his bail petitions were rejected by the court. The Narcotic Drugs and Psychotropic Substances(NDPS) court had rejected Aryan Khan’s bail petition. Following this, Aryan Khan had knocked on the doors of the Bombay High Court and the court had listed the case for hearing on Tuesday.

With Aryan Khan’s bail petition getting rejected multiple times, his father Shah Rukh Khan had reached the Arthur Road Jail and spent around 20 minutes with his son who is going through a tough period in his life. The meeting between the father-son duo marks the first interaction between them after the arrest row.

Looking at the reason behind the special court denying the bail petition filed by Aryan Khan on Wednesday, the counsel representing the Narcotics Control Bureau(NCB) told the court that the WhatsApp chat data of Aryan Khan says that Aryan Khan is involved in the drug-related activities on a regular basis.

Arguing on the behalf of the NCB, ASG (Additional Solicitor General) told the court that in the WhatsApp chat history, it was mentioned that Aryan Khan has a history of indulging in illicit activities.

Satisfied with the arguments, Justice VV Patil, the judge at the special court said, taking the WhatsApp chats as the prima facie, it is found that Aryan Khan used to be involved in the activities regularly. If given bail, he might repeat the same, the Justice reportedly said while issuing the orders.

Earlier, Gauri Khan, Aryan Khan’s mother had reportedly asked her cooks to not make sweets at home until Aryan Khan gets bail. The national media had covered the developments saying that Gauri is unable to digest the news of the arrest of her son.

Aryan Khan and others were arrested by the NCB sleuths after busting an alleged cruise rave party. After conducting raids on the cruise, the accused including Aryan Khan were taken into custody. The court had agreed to send the accused to jail.