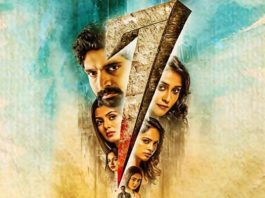 ‘Seven’ has been in the news as six glamorous heroines paired up with Havish. Why did these six heroines agree to do lip-locks with Havish and has the film justified its buzz?

Story:
An ACP officer (Rehman) in Hyderabad finds intriguing the stories narrated by two women Ramya (Nandita Swetha) and Jenny (Anisha Ambrose) who come to his police station to report their missing husbands.

He concludes that the husbands they are reporting is the same person Karthik (Havish), a software engineer in a MNC.

A mentally retarded old-man makes the case even more complicated by revealing that the guy in the photo is not Karthik but Krishnamurthy who was his classmate in his village in Godavari district. How would Karthik, a young guy, be classmate to this old man?

The mystery deepens with another woman coming to report her husband’s missing who also happens to be Karthik? What is the real mystery?

Artistes’ Performances:
Havish got to play two shades of the role that of a young software guy and a person in the 80’s. Surprisingly, Havish is fitted in the role of a rural 80’s guy than the software professional. In both the roles, he is clueless and expressionless.

However, the real star of the movie is Regina Cassandra, who in the role of Saraswathi owns the proceedings in the second half entirely.

As an obsessive woman, Regina has made her portion more interesting and later the old woman who played Regina’s older self has gone overboard.

Rehman as ACP is just okay. Nandita Swetha and Anisha Ambrose appear in the first half with neat roles while Tridha Chowdhary makes her appearance in brief sequences in the second half.

Poojitha Ponnada and Aditi Arya have got roles that are generally played by junior artistes.

Technical Excellence:
Nizar Shafi has directed this film as well as filmed it as a cinematographer. He gets marks as cameraman. Music is not appealing. Dialogues are plain. Editing is better in the second half.

Analysis
“Seven” is directed by cinematographer Nizar Shafi but the story and screenplays is written by Ramesh Varma. This is more of Ramesh Varma’s work. The writer has come up with most unbelievable twist for this thriller.

The story’s twist and turns encompassing 1980’s to present day is hard to digest. This is the fatal flaw in this thriller that is less engaging and more boring.

As these romantic episodes are clichéd, the entire first half never draws into it. The main mystery unfolds in the second half but even those portions look forced, twists look for the sake of twists.

When central point holds on the fact that a woman dreams the hero as her ‘man’, the hero ought to be very handsome personality or should have such ‘dream man’ persona off-screen.

If a woman dreams a personality like Mahesh Babu or Prabhas or Vijay Deverakonda and lives her life imagining them, it is believable.

Here Havish has played this role and his persona doesn’t fit for this aspect. This is why the film’s main point in the second half looks odd and unbelievable.

The film has many actresses but it primarily focuses on Regina’s character which is seemingly based on Farhan Akhtar’s role in Bollywood film “Karthik Calling Karthik”.

To be fair, the film’s final portions are a bit interesting compared to the rest of the mess. Regina makes them riveting with her performance but her thread is stretched beyond point and portions involving Regina’s old self (another actress has played Regina’s old woman character) have turned into laughable fare.

This is another example that Ramesh Varma’s poor writing skills and Havish’s expression-less action.

All in all, “Seven” has half dozen heroines but it offers little redeemable points but it sure provides head-ache.