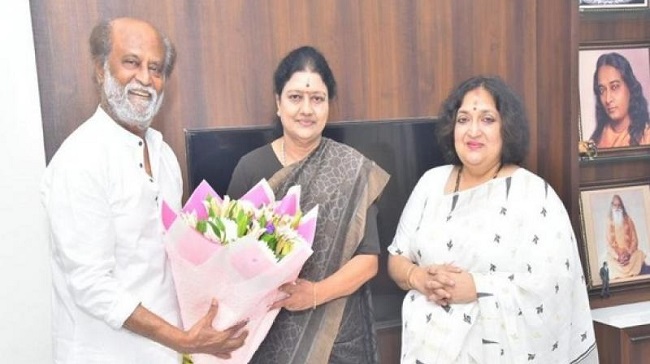 Former AIADMK leader and a close aide of late Chief Minister Jayalalithaa, VK Sasikala met Superstar Rajinikanth at the latterâ€™s residence in Chennai. The meeting between the two personalities who were supposed to plunge into electoral politics and backed out at the last minute had raised a lot of questions and debates.

The sudden meeting between the duo had triggered a debate on what topic would have come up during the meeting. Political experts raise a doubt that they might have discussed political issues and there might be a possibility of the two personalities starting a new political force.

It has been widely reported that the issues on the current political scenario and the issues related to the state were discussed during the meeting. Though there are a lot of opinions on the meeting, we can get an answer for this when either Rajinikanth or Sasikala provides an update.

However, people close to Rajinikanth rubbished the rumors of political discussions in the meeting and said, Sasikala met Rajinikanth out of respect as he recently recovered from illness. She also congratulated Thailavr Rajinikanth on receiving the prestigious Dadasaheb Phalke award.

On the work front, Rajinikanth was last seen in the action-drama Annaatthe. Siruthai Siva directed the film that made good numbers at the box office despite mixed talk. Lady Superstar Nayanthara essayed the female lead in Rajinikanth starrer.