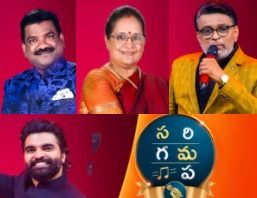 SaReGaMaPa - The Next Singing Icon The first look of upcoming suspense thriller ”?”, which will be directed by Vipra, was unveiled recently. The poster features a fiery-looking Adah Sharma with three faces. She took to her Twitter to reveal her character design look.
She wrote, ”The poster of my next film titled “?” Yup question mark is is the title Grinning face with smiling eyes Directed by Vipra Produced by @skcforfilms.”

The poster of my next film titled "?"
Yup question mark is the title 😁😁
Directed by Vipra
Produced by @skcforfilms
.#100YearsOfAdahSharma pic.twitter.com/uu9UoxHdeU

”? (Question Mark)” will be produced by Gouri Krishna under the banner of Shree Krishna Creations. The film will have music by Raghu Kunche. Sanjay, Bhanu Sri, Abhay, and Hari Teja are also part of the cast. Vamsi Prakash is in charge of handling the cinematography while SB Uddhav will edit the flick. The shooting of the film is complete and it is said to be a different role for Adah, which is also evident from the poster.

Announcement !Announcement !The title of my next film in telugu is " ? "
Produced by #GouriKrishna
Directed by #Vipra @skcforfilms
Yes that's the title ! " ? " pic.twitter.com/mTtmhM0MAs

”? is the first Telugu film to start and complete shooting during the pandemic. I dubbed myself for my role. Unlike others, it’s a different film and we will make sure this will definitely entertain the audience,” said Adah Sharma.
”We began the shoot during the lockdown and wrapped up at a rapid pace. It is a great thing that the heroine Adah Sharma was coming to the shooting at a very difficult time. At the same time, all the precautions have been taken against Coronavirus from spreading. I feel very happy that our title got a good response. We are sure everyone will appreciate the film,” said director Vipra.