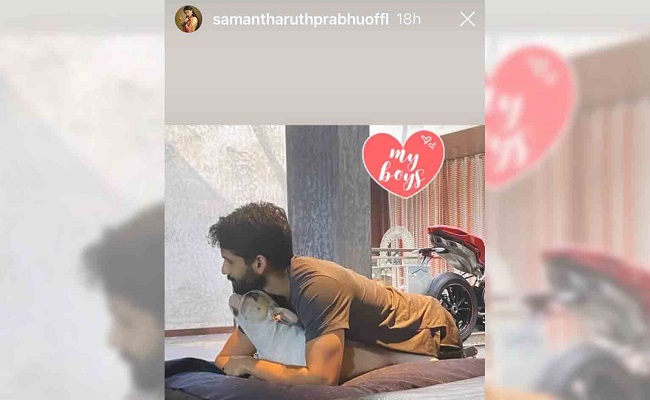 Southern star Samantha Akkineni has shared a picture of her boys on social media.

Samantha took to Instagram, where she posted a photograph of her husband, Telugu star Naga Chaitanya, and their pet dog Hash. In the picture, Chaitanya cuddles Hash, a French bulldog.

The actress put a heart sticker, which has “my boys” written on it.

Samantha keeps entertaining her fans and followers with pictures and funny videos of Hash.

She recently shared her special reason for loving yoga, saying it is because she gets to practices yoga along with hubby Chaitanya.

The actress, who was last seen in the Telugu film “Jaanu”, has made a name for herself in Tamil and Telugu film industries. She is known for her performances in films such as “Ye Maaya Chesave”, “Neethaane En Ponvasantham”, “Eega”, “Mersal” and “Rangasthalam”. She impressed all with her role in “Super Deluxe” last year.

She will next be seen in “Kaathuvaakula Rendu Kaadhal”, starring Vijay Sethupathi. The film also stars Nayanthara. It is directed by Vignesh Shivan.