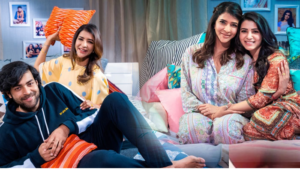 Some celebs get interviewed on the couches and some get interviewed while they are jogging or working out. But there is this interview show called “Feet Up With Stars” where the host joins the celebrity in a bed and brings certain interesting things out.

Right now the Telugu version of this particular interview show found their host in the form of Lakshmi Manchu. After running interview shows like Lakshmi Talk Show for a while and later moving on to social concern shows like Mee Kosam, she has now taken the mantle of bringing the bedroom (and bed) secrets of stars.

Guess what, the first two stars who are interviewed by Lakhsmi for this program are none other than queen bee Samantha and rising mega hero Varun Tej. Already the pictures of Lakshmi-Samantha in bed and Lakshmi-Varun are doing rounds everywhere, giving a surprise to Telugu audiences who have never seen such stuff.

The interviews will be available from September 23rd on an OTT platform and we wonder which other celebrities are going to join Lakshmi Manchu in the bed.