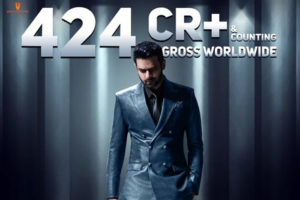 Prabhas has yet again proved his stardom with his action thriller Saaho turning out to be this year’s highest earner in the country. With 424 Crore-plus world-wide Gross i.e 232.6 Crore Share, Saaho becomes highest earner of 2019.

Estimated to have made with a whopping budget of Rs 350 Crore, the film’s non-theatrical rights have fetched 138 Crore and theatrical world-wide full-run share is Rs 232.6 Crore. Overall, the producers made Rs 370 Crore-plus which is a profit venture. However, the distributors of Saaho (Telugu, Tamil, Malayalam) said to have suffered losses. Yet Saaho (Hindi) is a profit venture again as the Hindi version alone did Rs 156 Crore Nett. Overall, Saaho becomes profitable venture for UV Creations and T Series.

With this, Prabhas is only South Superstar to have two pan-India highest grossers – Baahubali & Saaho. This is a great achievement for Prabhas. Despite mixed reviews, Prabhas has shown his dominance at the BO particularly in North belt.