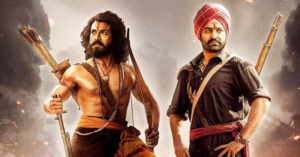 No words can describe the cinematic brilliance of maverick director SS Rajamouli. With every film, he is setting some benchmark. His last film RRR not only emerged as one of the highest-grossing films,but also created a rage among western audiences and technicians. He was invited to a popular film festival and his films were screened.

Indians pinned high hopes that it would be nominated for the Oscars officially from India. However, a Gujarati film was sent officially. This made RRR fans unhappy and they asked how a magnum opus was not picked for the prestigious award.

In what could be a piece of good news for the RRR fans, the Pan-India film is still in the Oscars and the film will compete in multiple categories. If everything goes well, we might see the successful film lifting the prestigious award.

As per the international media, RRR will try its luck in as many as 15 categories. As it is nominated in these many categories, fans are hoping that it would make it to the final cut in any one of the categories.

It is known that RRR was screened at the Los Angeles’ Chinese Theatre recently and the crowd was present in big numbers at the screen. Film observers say that the screening is the first big step in RRR’s nominations for the prestigious award.

A famous film reporter who works for Los Angeles Times Jen Yamato shared the news on Twitter that RRR’s Oscars race is very much on and the film is nominated in multiple categories. Hit number Naatu Naatu song was also nominated and the song was nominated under the Best Original Song Category.

In recent times, no southern film won Oscars. Suriya’s Jai Bhim was also nominated earlier. However, the film missed the opportunity and it received a standing ovation when it was screened.