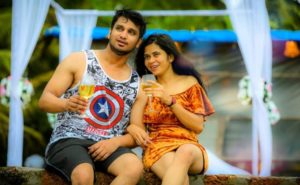 Nikhil Siddhartha, who had scheduled to enter into wedlock with his girlfriend on April 16, has postponed his marriage. Owing to Covid-19 pandemic and the global crisis, the responsible actor has decided to defer his marriage. While the fresh date of marriage is not yet finalized, the Arjun Suravaram actor’s family and the bride’s family have decided to shift the wedding.

Nikhil had got engaged to his sweetheart Dr Pallavi Varma on Feb 1st at a private ceremony at the girl’s residence in Hyderabad. Pallavi, a doctor, hails from Bhimavaram of Andhra Pradesh. The couple met through common friends. As they got along well as friends, cupid struck Nikhil first. It took a while for Nikhil to convince the girl. He had taken the girl to Goa and proposed her to marry. The girl has then accepted his proposal. The couple had then taken the matter to the notice of their respective families and got their consent. With the blessings of the families, the couple got engaged on Feb 1st.

The fresh date of the marriage will be finalized soon. Meanwhile, Nikhil is busy shaping up his body for his next film Karthikeya 2. The actor has also signed 18 Pages, which has story and screenplay by Sukumar and to be directed by Palnati Surya Prathap of Kumari 21F.

Meanwhile, it can also be noted that actor Nithiin, who got engaged to girlfriend Shalini and planned to wed her on April 16, too postponed his marriage.