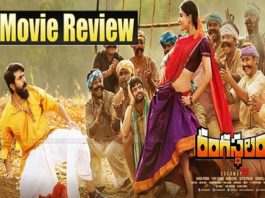 Rangasthalam, the first big ticket movie of Tollywood this summer has been riding on high expectations. Sukumar who has set a benchmark for himself with innovative ideas has made a rural drama with Ram Charan, who takes a big risk by accepting a character that is against his image. Let’s get into the details of Rangasthalam.

Rangasthalam is a fictional village set in the eighties time period. It is ruled by a ruthless President (Jagapathi Babu) who suppresses the villagers with his feudalistic mentality. An NRI Kumar Babu (Aadhi) questions this and stands against him in elections. Kumar Babu’s younger brother Chitti Babu (Ram Charan) loves his brother and goes to any extent for him. But will President let Kumar Babu to achieve his dreams? What happens to the lives of these brothers who stand against him?

Ram Charan is a revelation. He has truly arrived as an actor. It is not only his best performance yet but also one of finest in recent times. He got into the skin of the character and lived every moment on the screen as Chitti Babu. There is not a single wrong note in his performance as he elevates every emotion with his flawless act. His performance in the climax scene and the scene where he confronts Jagapati Babu during puja is a major highlight. It is Ram Charan’s show all the way.

Samantha is a fine actress and she has made Rama Lakshmi adorable. It is yet another feather in her cap. Jagapati Babu’s characterisation, his demeanour as the soft spoken evil man is splendid. We get to see other side of the actor who has aced playing the bad guy. Aadhi Pinishetty is very good. He elevates drama with subtle expressions. His performance in the interval scene and the scene where he puts a knife to his neck is superb. Prakash Raj is competent in a limited but crucial role. Anasuya is good as voluptuous Rangammatha. Every actor is aptly cast and plays a significant part in taking the story forward.

Sukumar for once has put his complex screenplays aside and made a perfect rural drama. He narrates a familiar plot in an engaging fashion. He doesn’t deviate from the narrative for the sake of humor or any other commercial elements. He makes everything a part of the story. He intelligently sets the story in eighties to make it more raw and authentic. It is arguably the best work of the director since Arya.

Every technician backs Sukumar’s vision with outstanding efforts. Art work is phenomenal. The music is fantastic and cinematography is top notch. Dialogue is superb. Fights are real and intense. Editor could’ve kept the run time short. Production values are awesome.

Rangasthalam is all about storytelling, characters and emotions. The plot is a simple one. A villain with feudal mentality is creating atrocities in a village and a voice rises against him. It is about the consequences that follow. Sukumar narrated the film at leisurely pace but does well in getting the emotions right. It starts off as a fun film with an entertaining characterization of the protagonist. Turns serious at the middle and drama thickens as it goes forward.

Sukumar did a fabulous job in establishing the bond between brothers and also the evilness of the villain. The romance track is entertaining and cute. We can predict a few upcoming incidents in the narrative but Sukumar cleverly throws in a twist using the hearing disability of the protagonist. However, not everyone may like the climax part that is stretched a bit for the sake of the twist. Action in the second half is very intense which might be too much for sensitive audience.

Taking wise Rangasthalam is entirely different from regular potboilers. It is an intense film with raw emotions. Sukumar’s style is similar to some Tamil movies that are made with identical theme. He could have kept things short in the second half where it takes too long to conclude. It turns heavy in the middle but ends on a good note with an interesting twist. Audience who love realistic dramas will fall head over heels with the film. Special mention to the production design team who did a mindboggling work with the sets that look extremely natural.

Every song is beautifully shot and comes at right intervals. The pathos song in the pre climax could have been avoided though. Rangasthalam may get mixed response from regular masala movie lovers as it is told in a raw manner that our audiences are not used to. It doesn’t have repeat value which will restrict its range at box office. On a whole, it is definitely worth a watch for its engaging drama and heartfelt emotions and above all for Ram Charan’s spectacular performance. Go for it.

No Chances Despite Scoring A Super Hit!

Mr. Naidu lauds his wife for following the wedding bond and...

Kamal Haasan administered with vaccine dose, urges everyone to get vaccinated