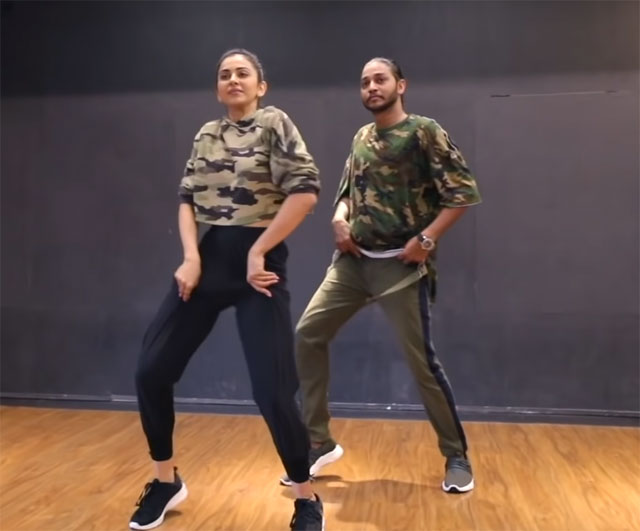 Tollywood star siren Rakul Preet Singh has been testing her luck in Kollywood and Bollywood lately. The actress who was last scene in ‘Dev’ movie is awaiting the release of her upcoming Hindi film ‘De De Pyar De’.

Ajay Devgan and Tabu played the lead roles in this movie and the trailer of the film has already created enough buzz around the movie which is slated for a grand release on May 17. Rakul Preet Singh was seen dancing for ‘Hauli Hauli’ song in the movie and Melvin Louis, choreographer joined her. The video of their dance is currently going viral on the internet. ”Recreating the magic of #HauliHauli once again with #MelvinLouis send us your dance versions of the song #punjabivibes @DeDePyaarDe #May17” captioned Rakul Preet sharing a video of her dancing with her choreographer.

Rakul is looking absolutely stunning in her outfit and her killer dance moves will definitely given an eyefeast for the audience. The fans are super excited to watch her dance on the silver screens. In Telugu, Rakul Preet will be next seen in Nagarjuna’s ‘Manmadhudu 2’ movie.