Advertisement
Home News Film News Rajamouli Went to US to Wish His Brother? 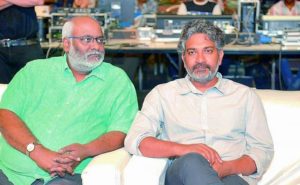 Rajamouli landing in Washington DC sparked off speculations but the numero uno director put an end to them by posting on Twitter that he would not be attending TANA.

Even the TANA event is taking place in the same city. Then why did he refuse to attend the event though he was present in the same city and his brother M M Keervavani’s also doing a musical show?

Buzz is that Rajamouli took a break from the shoot of “RRR” just to wish his “peddannayya” Keeravani on his birthday.

Since Keeravani is in Washington DC to attend TANA, entire Rajamouli family flew off to USA to celebrate his birthday on July 4. This was the personal work that Rajmouli noted in his Tweet, said a source.

Just to make Keeravani cut the cake with them, Rajamouli and his family members fly off to USA and stopped the shoot schedule of “RRR”.

Rajamouli owes all his success to his big brother Keeravani in his life.