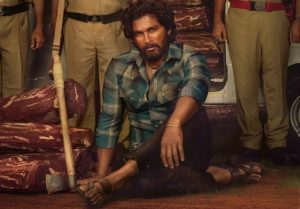 Allu Arjun is ready to entertain his fans with his next movie AA 20. Directed by Sukumar, the film has Rashmika Mandanna in the lead role. The first look of AA 20 along with the film’s title “PUSHPA” has been released and it shows Allu Arjun in quite an atypical garb, in a rugged avatar. Going by the entire setting, it looks like Allu Arjun is playing a unique role in the movie.

Allu Arjun himself took to Twitter to reveal the first look and title of his next film. His tweet reads, “First Look and the Title of my next movie “ P U S H P A “ . Directed by dearest Sukumar garu. Music by dearest friend @ThisIsDSP . Really excited about this one. Hoping all of you like it. @iamRashmika @MythriOfficial #MuttamsettyMedia.”

The Stylish Star is something to behold. He is seen sporting a thick mustache which surprisingly suits him well. But what is the real highlight is the actor’s amazing physique. Allu was always lean and fit but it looks like he has really beefed up for AA 20. From the first look, it seems that the movie will be action-packed.

Another notable thing about the movie is that it had a unique concept of pre-look in a true Rayalaseema language. Produced by Mythri Movie Makers and Muttamsetty Media, the music will be composed by Devi Sri Prasad.