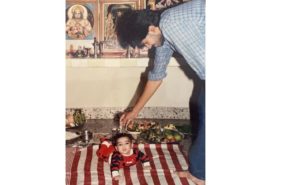 Power Star Pawan Kalyan is born in in 1969 according to Wikipedia. If we take that into consideration, he crossed 51 now.

He will celebrate his 53rd birthday in September, this year. But there are doubts whether this is true? Or is he much older?

Megastar Chiranjeevi shared a photograph through his twitter account today on the occasion of Ram Charan’s birthday.

Pawan is seen giving his blessings to months old Ram Charan in the pic. Now, Ram Charan is a 35-year-old man. Pawan appears to be a 20 or 22 year-old guy in the photograph. If we calculate Pawan’s age based on that photograph, he would be around 55 or 57 now.

Some people may comment, “What is there to discuss about Pawan’s age now? Is it really necessary?” But Pawan fans say that he is younger than YS Jagan Mohan Reddy.

If we have a look at Jagan’s birth year in Wikipedia, it is 1972. Pawan’s birth year is 1969. Even by wiki, Pawan is older than Jagan. If we observe the pic shared by Chiru, it appears that there is more difference in Pawan’s age than what is shown in Wikipedia.

Is Pawan Kalyan touching Shashtipoorti age by next general elections!