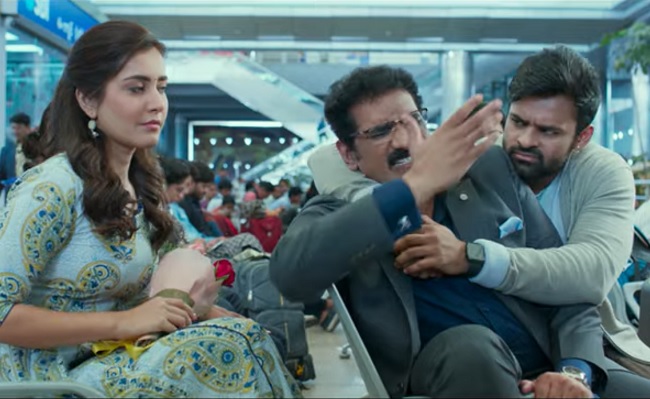 Maruthi has finally broken the shell that he had gone into post Bhale Bhale Magadivoy and is coming up with a complete family entertainer.Prathi Roju Pandage is about an old man (Satyaraj) who enjoys the last few days (five weeks to be specific) of his life with the help of his grandson (Sai Tej).

The setup certainly has some clichés of a family film where an old man gets ignored by his own children and get unconditional love from his grand children.However, it also promises a lot of fun with a few sequences where the grandfather tries to live his life to the fullest in a few days.

Emotional aspect isn’t covered in the trailer, but we can predict how this film ends given the setup and the character of Rao Ramesh, a materialistic son, who doesn’t give a heed to his father.Rashi Khanna is playing the role of a Tik Tok Celebrity that has the potential to click with the masses and the tik tok addicted youths.

The film looks very similar to Shatamanam Bhavati and Mauthi is clever enough to clear the doubts by including a reference to that film in the trailer itself.