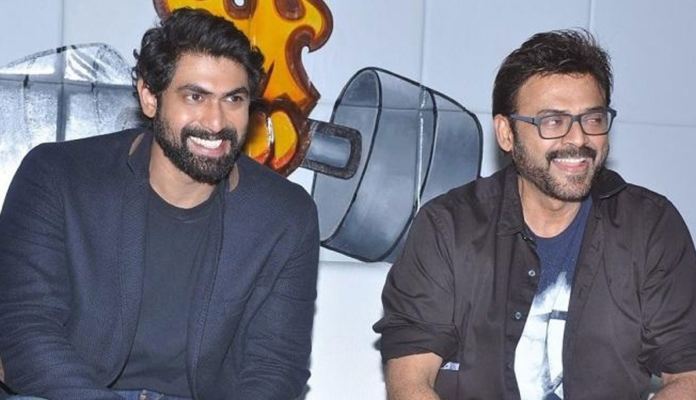 Its a known fact that Sithara Entertainment has acquired the Telugu remake rights of Ayyappan Koshyam Malayalam Movie. As part of this, the film was supposed to be made by featuring Balakrishna and Rana in Telugu. But for oblivious reasons, Balayya refused to play the role.

Now the latest buzz is that the film makers are planning to approach Venkatesh in the role of Balayya. And it seems that Venkatesh and Rana are already intrigued to act together in the remake.

Malayalam film Ayyappanum Koshiyum narrates the story of its title characters, Ayyappan Nair and Koshy Kurian, who lock horns and never seem to compromise over an incident and subsequently their egos fire up, making them to end up in a fierce battle.

In the film directed by Sachy, Biju Menon played the character Ayyappan Nair, a cop with impeccable record history, while Prithviraj is featured as a retired army soldier Koshy Kurian, who has an experience of 16 years in the service.

Venkatesh would play the role of Biju Menon, the police character in the Ayyappan Koshyam, while Rana seems to be playing the role of Prithviraj. Telugu remake rights producer Surya Devara Nagavamsi will soon disclose the full details of the film and the rest of the technical crew working on the film.

While on the flip side, he is currently bankrolling a project ‘Rang de’ that stars Nithiin in the male lead and Kirti Suresh in the female lead. Venky Atluri is seemingly going to helm the project.