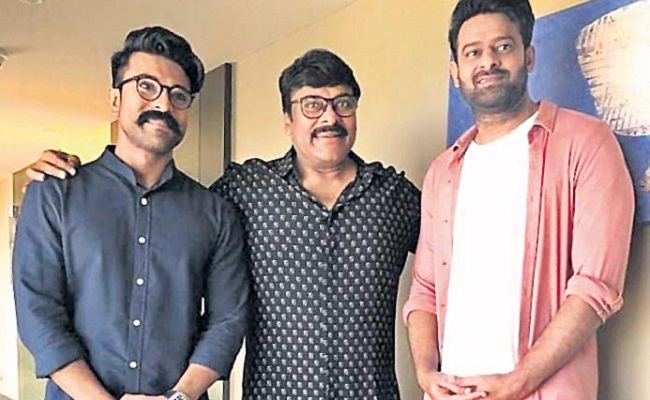 Prabhas has a huge fan following in the North Indian market on par with Salman Khan and Aamir Khan.

The staggering opening collections that “Saaho” has netted in North India is proof that the Hindi audiences have made him their favourite among the South Indian stars. Prabhas is now truly a star with Pan India appeal.

Ram Charan, who has close links with Prabhas wants to use the latter’s charisma for the promotion of “Sye Raa.” Ram Charan is a partner in some of the ventures of UV Creations that is home banner to Prabhas.

According to a buzz in the industry, Ram Charan is considering a proposal to bring Prabhas to a promotional event in Mumbai as it would help in promotion.

“Sye Raa” starring Megastar Chiranjeevi in the role of Uyyalawada Narasimha Reddy is being released simultaneously in Telugu, Hindi, Tamil, Kannada and Malayalam languages on October 2.

The movie’s Hindi rights were snapped up by Anil Thadani and Ritesh. These Hindi producers have suggested Ram Charan bring Prabhas for the promotional event as it would add hype. Apparently, he thought the presence of Prabhas will generate a lot of hype in the media for “Sye Raa.”

But the question here is whether Prabhas will agree to promote “Sye Raa,” since he has been staying away from the media after the release of “Saaho”.