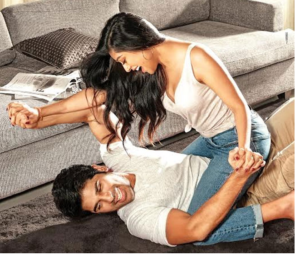 Young and talented hero Allu Sirish has been working on a romantic entertainer for a long time. The film was initially named ‘Prema Kaadantha’ but it is now changed to ‘Urvashivo Rakshashivo’. The makers have made it official that the teaser will be coming out on 29th September.

The makers confirmed the news by releasing a magical poster that shows Allu Sirish and Anu Emmanuel sharing a beautiful romantic moment. The chemistry between the lead pair is off the charts and they look great together onscreen. With white tops on, both Sirish and Anu are seen having an adorable fight and this poster is surely giving a lot of positive vibes.

Directed by Rakesh Sashii, the pictures of Sirish and Anu Emmanuel went viral on the internet at the start of the shoot. There have recently been rumours about the release date of Allu Sirish and Geetha Arts’ project. Reports suggest that the film will be coming out on 4th November. Dheeraj Mogilineni producing the film under Shri Tirumala Production Private Ltd banner and Allu Aravind presenting the film under GA2 Pictures banner. Achu Rajamani composed the music. Tanveer handled the cinematography while Karthika Srinivas does the editing.

Allu Sirish made his debut in the year 2013 but the actor has only a very few hits in his career. He was last seen in the film titled ABCD, which was released in the year 2019. The actor, who is quite active on social media has refrained from public glare over a couple of years for reasons unknown. Allu Sirish is making a comeback to the silver screen with ‘Urvashivo Rakshashivo’. Let us wait and see how the teaser is going to be.