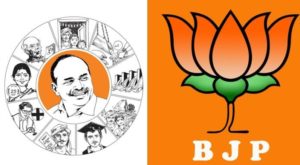 The national committee of the Bharatiya Janatha party gave us a clear idea of their stand, what they have been on to and it is very interesting to see from the center’s point of view. The reason for this is that people like Ram Madhav and Muralidhar Rao have been sidelined and people like Tejaswi Surya have been crowned.

However, leaders who have lost prominence are said to be given the main positions in the government. So the others may not have any importance in the party’s internal affairs. So, many interesting discussions are going on in Andhra Pradesh politics in this regard. This is because all those who are known as YCP benefactors have been excluded from party affairs for once.

Ram Madhav is known as the strongest leader of the YCP in Delhi. Coming to GVL, he won’t think twice to support YSRCP in public. There are few leaders in the party who support YSRCP amid any controversy by making a statement ‘TDP has also done the same in the past’ and divert the issue giving undue advantage to the ruling party. So many leaders in Delhi that belong to the above-mentioned cadre were neglected very recently.

Purandeswari and Venkaiah Naidu’s disciple Satya Kumar were given the prominent posts under the same theory and the BJP with these recent developments made it clear that they are not going to tolerate any support not only to TDP but also to YSRCP from their party.

Tamannah Bhatia Back To Home After Recovering From Corona