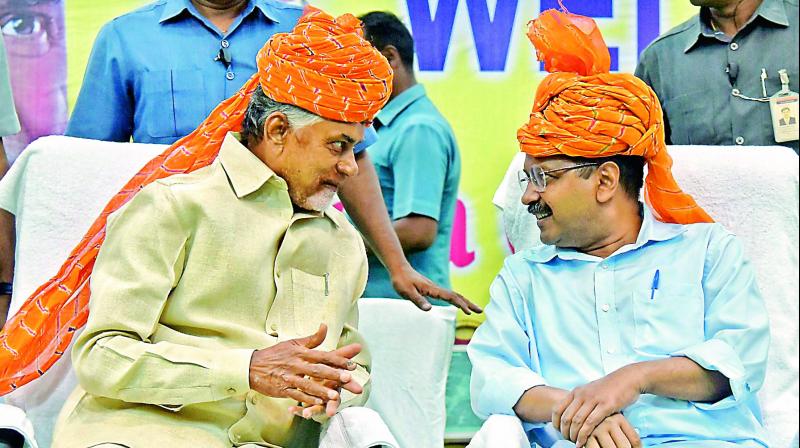 In what can be called a major blow to BJP, the AAP has clean swept the Delhi election with a huge 62 seats win. BJP is slowly losing its cheer on winning Lok Sabha elections, with the recent back to back losing in the states.There are few interesting strategies that Arvind Kejriwal followed to make sure his party wins against BJP and those very strategies Chandrababu failed to adopt, made him sit in the opposition.

Before 2019 general elections, Arvind Kejriwal many a time targeted and complained on Modi about the center is barricading him from doing the developments scheme implementation and is keeping the power and control over everything. That seems to have made him lose 7 MP seats to BJP. But the recent win in Delhi elections by AAP is to be accredited to the positive strategy followed by Arvind Kejriwal.

Kejriwal focused on developments like Schools, water supply, electricity and hospitals and he completely withdrew himself from criticizing Modi. Also, his election campaign too had the list of good deeds and implemented welfare schemes from his party in Delhi but not any mudslinging on BJP in any way. While Amit Shah concluded his every campaign meeting with a verbal attack and provoke on Shaheen Bagh, Arvind Kejriwal kept it to his welfarism and nothing else.

Even his stand on Hindutva in a positive way and soft way helped AAP in a big way towards gaining a vast margin against the national party BJP.

Well, if this is from Delhi where AAP registered a gigantic win against BJP, the comparisons are drawn to that of Andhra Pradesh where Chandrababu lost big with his unwanted scuffle with BJP in last one year instead of focusing on welfare and development in the new state. Had Chandrababu shifted his focus on projecting his acts to develop the state’s welfare instead of blaming Modi in every chance he got, maybe, he would have had a chance. That once mistake of Chandrababu cost him big while Arvind Kejriwal’s focus on his own positives gave the wanted result.