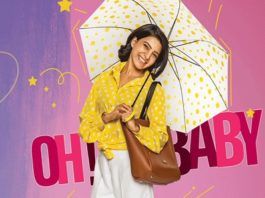 Oh Baby is an official remake of Korean Drama Miss Granny which has a unique plotline. The film is about having second chance in life.

Baby (Lakshmi) is heartbroken when she is sent out from her son’s home. She gets a boon and suddenly turns into a twenty four year old young woman (Samantha). She calls herself Swathi and rents a portion in her friend Chanti’s (Rajendra Prasad) house. A young man falls for her but Swathi has to choose between her current younger self and her original life.

There cannot be a better choice than Samantha to play the role of Baby aka Swathi. She is a very intelligent actress who knows what is required for a character to shine. Sam just nails the character with her stupendous performance and adds another jewel to her crown. It is a tough character to play, but Samantha makes it look easy. Rajendra Prasad as her good friend comes up with an endearing performance. Naga Shaurya’s performance is adequate. Rao Ramesh is good as a son stuck between mother and his family. Tej, Sunaina, Urvashi and Pragathi are apt in their respective roles.

Nandini Reddy stays loyal to the original script and keeps the soul intact. She has done well in getting the emotions right and balancing the fun mood throughout the film. More than funny moments it is the emotional episodes that makes the movie work and Nandini Reddy did well in hitting the right notes with her deft handling.

The film is a musical and surprisingly Mickey J. Meyer has come up with a lackluster album that doesn’t have single chartbuster song. Background score is on point though. Cinematography is neat and the production design is very impressive as the film looks visually rich despite limited budget. Dialogues are good in parts.

‘Swathi’ in Oh Baby is any actress’s dream role and Samantha makes a meal of it. She is arguably the best actress among the contemporary Telugu heroines and Oh Baby will be remembered for a longtime as her finest performances. It is not an easy character to play, but Samantha nails it without a single flaw. Samantha is one of the very few actresses who can be effortless in comedy and emotional scenes. Oh Baby gives her ample scope to use her talent to the fullest potential.

Credit to the Korean writers for coming up with a very unique plotline and director Nandini Reddy is clever enough to not to tamper with it. She didn’t make many changes to the script and remained loyal to the original. However, she hasn’t got the best out of Mickey J Meyer who delivers a mediocre album for a musical. A better audio would have given wider appeal and reach to the film.

First half of the film is breezy without any hiccups. The initial portions have set the mood well without going overboard. However, there are many lags in the second half which has been dragged unnecessarily. Director tried to tie all the ends and give it a satisfying ending to each and every thread which in turn increased the runtime. Despite few hiccups in the middle, Oh Baby ends well with a emotional climax tugging at our heartstrings. There is a beautiful cameo at the end to make us leave the auditorium with a smile.

On a whole, Oh Baby is a fun film with its heart at the right place. It is sure to win hearts as well as the box office. The concept and execution will appeal to urban audience than others.