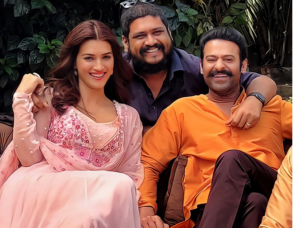 We have reported that the teaser of Prabhas’ upcoming film ‘Adipurush’ is expected to be launched in Ayodhya on October 2nd. Confirming it, the film’s director Om Raut took to social media and announced the big news. He wrote, “Our magical journey is now yours to experience & love! The much-awaited #AdipurushTeaser and the first poster of our film will be launched on Oct. 2! Venue – Bank Of Sarayu, Ayodhya, UP!”

He also revealed that this magnum opus film will be hitting the screens on January 12th, 2023 in IMAX & 3D. He shared the pictures of himself with the producer as well as the lead actors Prabhas and Kriti Sanon. Fans of Prabhas are now jumping in joy hearing this news and they can’t wait to see him as Lord Ram in this mythological drama.

There are even rumors coming out that Prabhas will be attending the famous Raavan Dahan ceremony which will be held in Ramlila Maidan in Delhi on October 5th. While nothing is confirmed, fans are hoping that it becomes true. If Prabhas manages to get accepted as lord Ram, the collections for ‘Adipurush’ are going to be off the charts. We need to wait and see if it happens or not.

Directed by Om Raut, Saif Ali Khan portrays the character of Lankesh in this ‘Adipurush’. Gorgeous Bollywood beauty Kriti Sanon will be seen as Sita while T-Series is bankrolling this project.

After gaining a huge mass following across the nation with ‘Baahubali’ franchise, star hero Prabhas is finding it difficult to impress the audience. His stylish action flick ‘Saaho’ did not meet the expectations while the love story ‘Radhe Shyam’ ended up as a disaster. He is working on three projects right now and they are ‘Adipurush’, ‘Salaar’ and ‘Project K’.