Advertisement
Home News No place to stay for Kishan Reddy in Delhi? 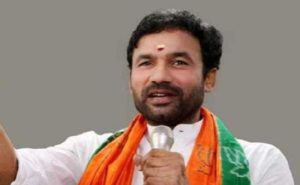 It has been nearly four months since senior Bharatiya Janata Party leader from Secunderabad G Kishan Reddy was sworn in as Union minister of state for home in New Delhi.

Except during the Parliament sessions, Kishan Reddy could be seen most of the times in Hyderabad attending local programmes.

Except when there are important meetings and official assignments, he is going to Delhi for two or three days before returning to Hyderabad.

Inquiries revealed that the reason for Kishan Reddy not moving to Delhi permanently is that he has not been given official accommodation in Delhi. Whenever he goes to the national capital, he has been staying in Telangana Bhavan.

According to some media reports, the Union urban development ministry has allotted a minister’s quarters to Kishan Reddy at Tuglaq road in Delhi. But it is still being occupied by a former union minister Jayanth Sinha, who has not vacated it yet.

It is learnt Jayanth has made a request to the town planning department to allocate another house to him and he was given a bungalow in front of BJP office where the party senior leader Radha Mohan Singh is staying. And Jayanth has no option left but to stay at Tuglaq road.

As per the rules, the former union ministers have to vacate their bungalows within a month after the dissolution of Lok Sabha. The Lok Sabha was dissolved on May 25, 2019.

The centre has already issued notices to former ministers to vacate the bungalows. They are now said to have been given a week’s time failing which basic needs like water and power supply will be stopped.