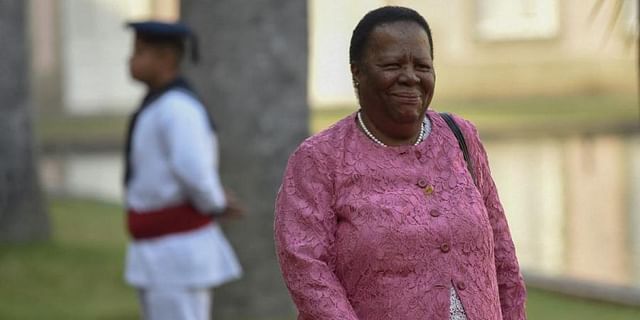 JOHANNESBURG: The BRICS countries have agreed not to recognise the Taliban government in Afghanistan until they receive assurances that it will comply with the prescripts of international law, South African foreign minister Naledi Pandor said on Friday.

“We had a BRICS Summit (on Thursday) in which our president spoke, and we’ve adopted a statement, that is a BRICS statement, very clearly articulating the view that we want to see the restoration of democracy and enjoyment of fundamental human rights by the people of Afghanistan,” Minister of International Relations Pandor told the radio station 702.

The minister also explained why South Africa refused to accept Afghan refugees as an interim stop while their immigration permits to the US were processed.

“We received a rather odd set of letters from South African based lawyers, asking that we receive two aeroplane loads of persons who had sought refuge in Pakistan, but would be transported to South Africa in order for US authorities to vet them in South Africa, because some of them would be given the special immigration permit by the United States,” he said.

“Firstly, we’re not a vetting base; and secondly, if these are refugees and they would have gone to Pakistan, which is a safe country, there is no international law requirement that they must proceed to a third country,” Pandor said.

She said in terms of practice, the first engagement would be to seek asylum in Pakistan, which they have done; and if Pakistan wants South Africa to help in any way, it would not be through a law firm in South Africa that represents the government, but the government itself. “When we contacted the government of Pakistan about this, they knew nothing of this,” Pandor said.

The minister also said that the withdrawal of the US Army from Afghanistan as the Taliban rapidly took over all areas of Afghanistan was “exceptionally badly handled”, placing the country’s security at risk.

“I believe, as with much of the world, that the process wasn’t handled very well. I think there should have been a far smoother process of particularly the evacuation of persons that the US had promised they would evacuate from that country. So, I think the management was rather of concern,” she said.

The foreign minister described the fall of the Afghan government as “very surprising”. “The army couldn’t hold out, so security was not able to be provided for the people of Afghanistan, so the whole situation really can be described as exceptionally badly managed,” she said.

The Taliban swept across Afghanistan last month, seizing control of almost all key towns and cities in the backdrop of withdrawal of the US forces that began on May 1. On August 15, the capital city Kabul also fell to the Taliban, even as a large number of Afghans attempted in vain to flee the war-torn nation.

The foreign minister also said the authorities in the UK were continuing to remove South Africa from the red list for visitors due to the COVID-19 pandemic.

“I think it’s unwarranted as South Africa has made really good progress through this third wave and I think South Africa’s health system has shown that we are able to cope with the challenge. We have sufficient measures in place. We are conveying this to our counterparts in the UK and we hope that very soon sense will prevail,” Pandor said.