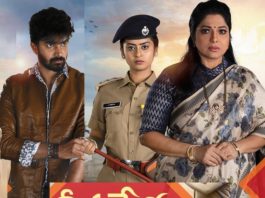 Manchu Vishnu has pinned a lot of hopes on ‘Mosagallu’. Apart from playing the lead, he even bankrolled this pan-Indian project which is hitting the screens in Telugu, Tamil, Hindi, Malayalam and Kannada. The teaser and songs raised a lot of curiosity over this film. Now, we have the theatrical trailer which was released by Megastar Chiranjeevi.

As we know, the film is based on the biggest IT scam in the world. Vishnu and Kajal play siblings in this movie and they decided to become rich by any means. They form a team comprising of themselves, Navdeep, Naveen Chandra, Viva Harsha and others commit a huge scam where they take over 2600 crores. While everything goes as planned, the system starts to look into it. Suniel Shetty plays the role of a police officer who is hellbent on catching them. The rest forms an intriguing tale of money, crime and a lot of action.

All the lead actors did great a great job going by the trailer and the production values look decent too. The music by Sam CS elevated the trailer. Written and directed by Jeffery Gee Chin, the release date of ‘Mosagallu’ is yet to be announced. On the whole, the trailer managed to grab the attention of the film lovers.