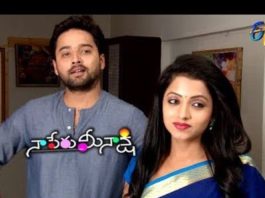 Serial Plot:
A lovely Romantic Comedy love story between a soft innocent and intelligent. traditional hidden beauty, Minakshi who comes from a below middle class family and a very smart, intelligent, flirtatious and stunningly handsome young man Radha Krishna Vanamali hailing from a super-rich corporate type business class family. Radha Krishna Vanamali, son of Dhanraj Vanamali and Aparna Vanamali, a dynamic, smart, handsome young man, is the MD of Allika Designs. Dhanraj is a super-rich business man with sportive mind set and Aparna is a well-educated high society corporate lady who is always very particular about her and her family’s perfect behavioural make-up.

The significant roles which keep the show ON with energy are:-

1. Minakshi’s sister-in-law, Bhudevi shows the peaks of her hidden sadism and thirst for money through her diplomatic and sweet behaviour and makes all her desired woks happen easily.

2. Minakshi’s nephew, Google gives a good entertainment who is named after his nature.

3. Kalyani, Bhagya Laxmi and Attili Sattemma are the three ladies residing in the same colony who are the employees of a fashion house named ‘Allika Designs’. They stand as a perfect reflection for the lower middle class narrow and selfish female mind sets. All the three characters keep entertaining the audience with their startling, unpredictable and shocking deeds every time they appear on the screen.

The Romantic Comedy Entertainer runs with interest, curiosity and tension about the reactions and repercussions that take place and how the chemistry between.. is to be seen on small screen, only on etv every [email protected] 8.30pm Monday to Saturday. 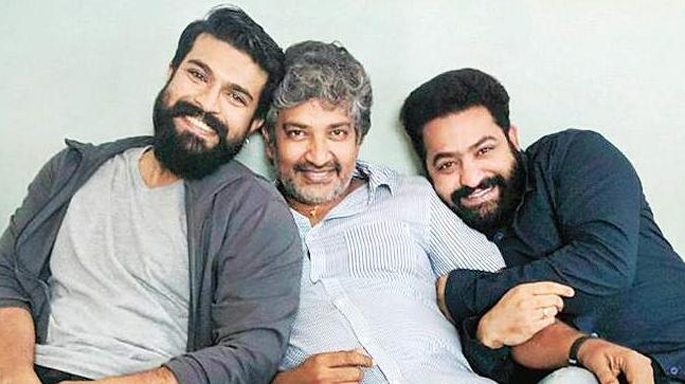 Many huge directors worked in Tollywood till date but only Rajamouli entertained the thought of making a multi starrer movie with a Mega hero and a Nandamuri hero. As a result we have the biggest film in India titled RRR waiting to hit the screens right now. This magnum opus should have been released by now but it got postponed due to the third wave which affected the movie business. The makers recently updated that the film will be arriving either on March 18th or April 28th based on the circumstances.

While Rajamouli made sure both roles had equal significance and screentime people are eager to know the top directors favorite role among the two. He gave enough elevation shots for both Ram and Bheem in the trailer and we can hope for the same in the full film too. But Rajamouli revealed in a recent interview that he slightly likes Ram Charans Ram character a bit more compared to NTRs Bheem. While it is sure that Rajamouli might have made sure that fans of both star heroes have a huge feast in theatres he recently let out his personal preference. Let us wait and see why likes Ram more than Bheem on the big screens.

RRR is produced by DVV Danayya over a budget of over 400 crores and it will be released all over the world. SS Rajamouli is aiming to score another industry hit with this multi starrer and MM Keeravani is the music composer. Alia Bhatt is playing the role of Sita in this film while Ajay Devgn will appear in a brief role. Olivia Morris is also a part of the film. Apart from a few noted Hollywood actors RRR has actors like Shriya Saran Rajeev Kanakala Samuthirakani and others doing key roles. NTR will be seen as Komaram Bheem while Ram Charan plays the role of Alluri Seetha Ramaraju in this massive film which was delayed multiple times already. Senthil Kumar is the director of photography while Sabu Cyril is the production designer. Srinivas Mohan is the VFX supervisor for this huge project. Both Charan and NTR are moving on as they are focusing on their next projects with Shankar and Koratala Siva respectively.