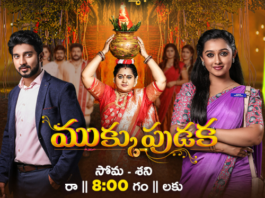 Nikhil Siddhartha and Chandoo Mondeti’s mystery thriller ‘Karthikeya 2’ is doing extremely well in not just the Telugu states but also all over the country. What is surprising to everyone is the fact that it crossed everyone’s expectations and brought good collections from the Northern market. On Tuesday, ‘Karthikeya 2’ got 75 lakhs in North India and it is giving tough competition to ‘Laal Singh Chadda’ and ‘Raksha Bandhan’ that came on the same weekend.

What is even more astonishing is the fact that the Hindi version of Nikhil’s film got only 53 shows on its first day. The positive talk and the promotions from right-wingers promoting it have made the film successful. On its third day, the movie had 711 shows and it is now playing in 1575+ shows. It has been five days since its release and the shows of Hindi version grew rapidly along with its collections. With ‘Janmasthami’ coming this Friday, sources say that over 2500-3000 shows ae being planned in Hindi alone. This huge information is shared by Nikhil himself on his social media handle which shows how the level of happiness he is enjoying right now.

This movie is produced jointly by TG Vishwa Prasad and Abhishek Agarwal. Kaala Bhairava is the music composer. Karthik Ghattamaneni is the cinematographer. sequel to ‘Karthikeya’ which came out in 2014. Written and directed by Chandoo Mondeti, ‘Karthikeya 2’ is a mystery thriller. Anupama Parameswaran is the heroine in this film. Elite Bollywood actor Anupam Kher will be seen as Dhanvantari while Srinivas Reddy plays the role of Sadananda. Harsha Chemudu’s role is named Suleman while Aditya Menon played the character of Santanu.