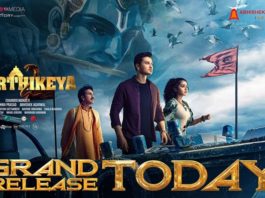 ‘Karthikeya’ which released in 2014 was a super hit. The combination of Nikhil and Chandoo Mondeti delivered a perfect mystery thriller. After 8 years, they have hit the screens today with ‘Karthikeya 2’. The trailer and the promotional content appeared quite intriguing and people were eagerly waiting for this film despite the postponements. The film is in theatres now and let us dive into the review straightaway to find more about this film.

Karthikeya (Nikhil Siddhartha) is practicing medicine after completing his MBBS. He looks at everything from the perspective of science and disregards all the superstitions. But he goes to Dwaraka because of his mother’s wish and he faces a lot of unexpected situations there. An archaeologist gives him a big responsibility before dying. Assuming that Karthikeya killed the archaeologist, the police go after him. Karthikeya escapes from them and starts his journey towards fulfilling his responsibility. What is the responsibility? Did he achieve it or not forms the rest of the movie.

Usually, a lot of directors feel high pressure when they are making a sequel of a super hit movie. Makers who create wonders the first time fail to deliver when it comes to a sequel. They tend to go away from the soul of the movie in the pursuit of making something better than the first part. But Chandoo Mondeti who made ‘Karthikeya’ back in 2014 did not make this mistake. He readied a very interesting script for ‘Karthikeya 2’ and made it on a bigger canvas. His story was written on a large scale and there were moments where he fell off the track but he did not disappoint the audience. Though this film may not make you glued to your seats throughout the film, it engages you for the most part. We get a feeling of having watched a good thriller by the end of ‘Karthikeya 2’.

Hero is a guy who believes what he sees and the story revolves around god and temple. The conflict point between the hero and the story is what attracts the audience towards this film. Chandoo Mondeti narrated the film quite well and gave a lot of good thrills. Keeping the theme of ‘Karthikeya’ intact, he gave us a new story by shifting the backdrop from Subramanyapuram to Dwaraka. While hero solves the mystery of temple in a village in ‘Karthikeya’, the hero has a mission this time. What he faces throughout the journey forms the crux. The mystery element and suspense factor in ‘Karthikeya’ is the major highlight while this goes missing in the second part. But the film does not bore you as the director keeps on turning the story and introduces us to new characters at regular intervals to make things more interesting.

‘Karthikeya 2’ starts off at a slow pace. The director took time in establishing the character of the main lead. The story picks up pace after the hero goes to Dwaraka. The whole story is about a lot of bad people trying to get their hands on lord Krishna’s bracelet which has magical powers and the hero gets dragged into this whole drama. The significance of this bracelet hasn’t been explained in a convincing manner. Due to this, the dramatic effect gets reduced by a lot as these portions are showing with the help of graphics.

After a bumpy ride in the first half, ‘Karthikeya 2’ turns very interesting by the time it reaches the interval point. The second half runs on a very intriguing fashion and the scenes where the hero finds clues about the bracelet are shown in a very gripping manner. These episodes will definitely impress the audience. Anupam Kher’s character is quite important despite its limited screen time. The way he explains the greatness of Sri Krishna is just amazing. The pre-climax and climax portions are dealt wonderfully. The visuals and presentation are top notch and it surprises you. Despite lacking the suspense elements, the grandeur and engaging narration along with constant turns keep the audience hooked onto this thriller.

Nikhil looked very confident in this film. He suited the role perfectly and his efforts are clearly visible on the big screen. He is the best option for this movie and showcases his maturity in a lot of scenes. Anupama Parameswaran as Swathi is very good. She is not a regular heroine but will be seen as one of the main characters. Srinivas Reddy excels in his role and his combination scenes with Harsha provided a few laughs in this serious thriller. Aditya Menon is strictly okay and Tulasi is regular as hero’s mother. Praveen, Satya and others did not get much screen time.

There is not much scope for songs in this film and the few tracks were used as montages. Kaala Bhairavaa tried something new with background score but it did not give the necessary elevation. The usual brilliance of the young composer is not seen in this film. Karthik Ghattamaneni’s visuals are fantastic and give you the feel of a big movie. The producers have not at all compromised. Manibabu Karanam’s dialogues are meaningful and elevate a lot scenes.

Chandoo Mondeti is in top form once again. He excelled in both writing as well as direction. The way he links our mythology in this story explains a lot about his talent. Apart from a few hiccups in the first half, he did a great job with ‘Karthikeya 2’.