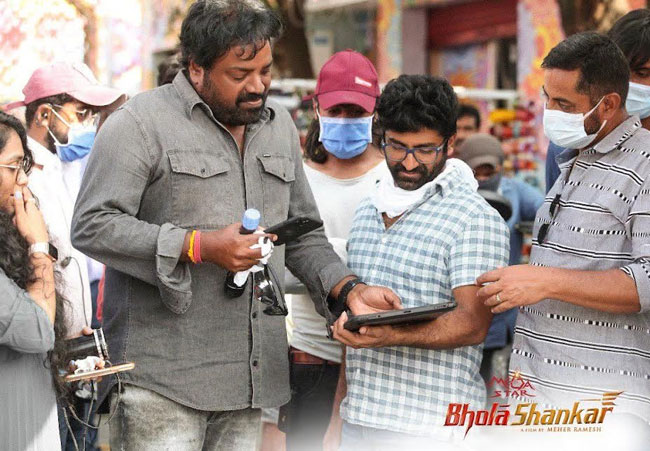 Director Meher Ramesh who took a long sabbatical from directing after delivering duds like ‘Shakti’ and ‘Shadow’ is finally aiming to make a comeback with ‘Bhola Shankar’. This film is a remake of Tamil star hero Ajithâ€™s ‘Vedhalam’ which came out in 2015. Megastar Chiranjeevi is playing the title role in this movie which has National Award-winning actress Keerthy Suresh playing the role of his sister. Interestingly, Keerthy Suresh recently played the role of superstar Rajnikanth’s younger sister in ‘Annathe’ and she became an onscreen sister of Megastar Chiranjeevi in â€˜Bhola Shankar’.

Chiranjeevi is juggling between the sets of ‘Godfather’ and ‘Bhola Shankar’ right now. Seems like Meher Ramesh is doing all he can to finish the project as quickly as possible. The makers recently took to social media and announced that the first schedule of the film has been wrapped up already. The picture showcases Meher Ramesh having a serious discussion while looking at the footage. Seems like the makers have erected a huge set for a grand song. The team revealed that a stylish fight sequence has already been finished in the first schedule. This news is making the fans very happy to hear this news.

Anil Sunkara is producing this crazy project under ‘AK Entertainments’. Milky beauty Tamanna will be seen romancing Megastar in this movie while actors like Raghu Babu. Rao Ramesh, Murali, Sharma, Ravi Shankar, Vennela Kishore and many others play crucial roles.

Megastar Chiranjeevi’s ‘Acharya’ is releasing on 4th February and fans are eagerly waiting for it. Kajal was selected as the heroine and star hero Ram Charan was roped in to play an important role. Pooja Hegde will be seen romancing the young star hero in this social drama directed by Koratala Siva. Apart from this, he is acting in ‘Godfather’ which is a remake of Malayalam super hit ‘Lucifer’. Mohan Raja is the film’s director and fans are hyped about this project. Chiru is working on two remakes right now. People are expecting them to be sure shot hits and the makers are doing all they can to cater to Megastar’s huge fanbase. Let us wait and see what happens.