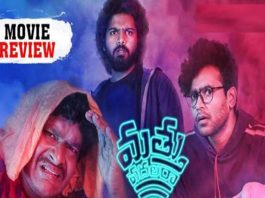 Mathu Vadalara is a new age Telugu film that will appeal to modern audience. It breaks all the cliches of a regular Telugu film and treads a completely different path and yet leaves a lasting impression with a thrilling narrative laced with loads of humor.

Babu Mohan (Simha) is a courier delivery boy who gets peanuts as salary despite putting in a lot of hard work. As Babu gets frustrated with his job, his friend and roommate Yesu (Satya) shows him how to get ‘tips’ from the greedy customer. Babu is reluctant, but tries to pull it off and his very first attempt goes awry. He is now left in a deep mess and needs to clean it up as soon as possible. But little does he know that what awaits on the other side.

Simha, younger son of Keeravani seems to be very comfortable with the camera. He is not the usual ‘Telugu cinema hero’ and makes us believe that he is really going through hardships of life. Satya steals the show with his terrific comedy timing. He is seen throughout the movie and offers bundles of fun. Agasthya is good in a key role. His performance in the climax portion is impactful. Vennela Kishore and Brahmaji are as reliable as always. Atulya makes an impression in a brief role.

Ritesh Rana has woven the story around some viral videos that he had seen on the internet. It is a director’s film with flashes of noticeable brilliance shown throughout. Ritesh has a terrific sense of humor that makes Mathu Vadalara all the more special. There’s never a dull moment in the narration despite having no songs.

Kaala Bhairava, elder son of Keeravani makes a sensational debut as the music director. His background score is simply superb and one of the major assets of the film. Cinematography is splendid as the cinematographer puts the audience right in the middle of what is happening. Production design is simplistic yet effective. Editing is crisp. Dialogue is witty. Production values are awesome.

The psychedelic part is a bit overdone

Few scenes are stretched beyond needed

Mathu Vadalara is a film that seems different right from the word go. The story is set beautifully from the point of view of people (courier boys) whom we don’t care about. A frustrated courier boy decides to ‘steal’ from his customers, but he picks the wrong one to make his first attempt at it. He is left in a big soup before he realizes and he needs to get out of trouble without leaving any traces behind. The story seems simple on paper, but director does a tremendous job in narrating it in an unpredictable manner. None of the twists can be guessed beforehand as the director never gives away anything about what’s in the store.

There is a lengthy episode in the first half where the protagonist tries to cover up his crime. It happens inside a luxurious flat and the way this scene is handles shows the brilliance of director. He cleverly involves ‘friends’ characters and keep the fun part alive despite a serious scenario. Director cleverly uses comedy as the tool to run this story. The fictitious Telugu Television serial running in parallel to the main plot is hilarious with a strong satire on how our Television soap operas are made. In the comedy department, Satya takes away the cake as he entertains us nonstop with both situational and dialogue comedy.

The story and characters are nicely setup in the first half with lot of fun moments and it gets a bit serious in the second half as we get to know what actually happened. The mystery element has been maintained very well until the main twist is revealed. The story and all the things that happen to that point look convincing and never seem farfetched. However, the film drags a bit post the twist is revealed as the director gives us a visual detail of what happens in the mind of a person that is exposed to drugs.

Nevertheless, there is hardly any dull moment in entire runtime of Mathu Vadalara. It keeps us invested in the story and make us root for the characters without missing out on humor. The film is not for the masses or for those who like regular masala. It is a film that is targeted at modern audience and it is a success in achieving what it is aimed at. This is a rare gem from Telugu film industry that cannot be missed.