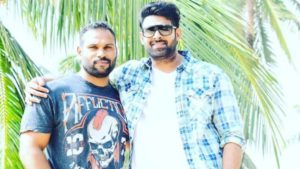 Fitness for darling Prabhas seemingly reduced post ‘Saaho’ ever since the lockdown was imposed.

In this regard, Laxman Reddy, who is also a Mr World 2010 is Prabhas’ fitness trainer since seven years from Bahubali time, took charge of the actors’ fitness. It’s a known fact that the actor has as of late gifted a swanky Range Rover Velar SUV to his gym trainer, which was surely a darling gesture.

Laxman earlier shared that, for Prabhas, fitness training is like a stress-buster, who relishes it thoroughly. He said that the actor would wrap up shooting at 12 midnight to continue training, regardless of how tiresome his action sequences of the day were.

Credible sources now reveal that the trainer had reached Prabhas’s house to train him more efficiently and have a perfectly chiseled body for having a suitable physique for his next.

The actor would star consecutively in Radha Krishna’s directorial ‘Radhe Shyam’ alongside Deepika Padukone, a mythological film ‘Adipurush’ directed by Om Raut and his 21st project under Nag Ashwin’s direction. Prabhas is said to have started the shoot for Radhe Shyam, which is slated for the release by Pongal in 2021.