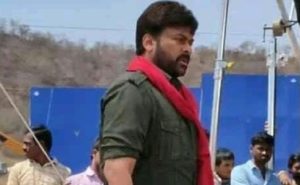 Megastar Chiranjeevi has become quite active on social media. He joined Twitter and Instagram on the Ugadi festival and since then there have been constant posts from him, some of them are humorous replies to his colleagues, and some are appreciative posts.

While Mega fans are quite elated with their ‘Boss’ making such a noise on social media, they also have a demand. They are asking him to release the first look of his current film.

Now that Ram Charan’s video from “RRR” has also been released, the fans are asking him to release the first look.

In fact, Megastar Chiranjeevi planned to announce the title and release the first look of “Acharya” on Ugadi but the makers had dropped off the idea due to coronavirus outbreak and lockdown. They are now planning to release in April.

Being directed by Koratala Siva, “Acharya” has Chiranjeevi playing the role of a professor. Charan will be seen in a guest role. Kajal Aggarwal has been chosen to play the female lead.