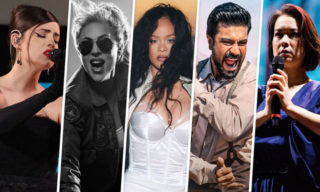 It is well known that ‘Naatu Naatu’ song from SS Rajamouli’s magnum opus film ‘RRR’ has been nominated for the Oscars. It already won the Golden Globe Award and the song is one step away from creating history. If ‘Naatu Naatu’ manages to win the award despite all the huge competition, Keeravani will become the second Indian music composer to get the Oscars after AR Rahman.

The magical composer won the Oscars for the ‘Slumdog Millionaire’ film which is a Hollywood flick made about Indians. But ‘RRR’ is a Telugu film that is creating waves on the international stage. Along with ‘Naatu Naatu’, there are four other songs that were nominated in this category.

They are ‘Applause’ by Diane Warren, ‘Hold My Hand’ which is composed and written by Lady Gaga. It is from Tom Cruise’s ‘Top Gun: Maverick’ film, ‘Lift Me Up’ from ‘Black Panther: Wakanda Forever’. The music is by Rihanna, Ryan Coogler and others. The other nominee is ‘This Is A Life’ from ‘Everything Everywhere All At Once’ which is composed by Ryan Lott, David Byrne and Mitski. Let us see if Keeravani creates history with ‘Naatu Naatu’ in March or not.

‘RRR’ is produced by DVV Danayya on a budget of over 400 crores. The lead actors delivered spectacular performances and MM Keeravani is the music composer who is one of the main pillars in the film’s success. Alia Bhatt is playing the role of Sita in this film while Ajay Devgn appears in a brief role. Olivia Morris is also a part of the film.

Apart from a few noted Hollywood actors, ‘RRR’ has actors like Shriya Saran, Rajeev Kanakala, Samuthirakani and others did key roles. NTR will be seen as Komaram Bheem while Ram Charan plays the role of Alluri Seetha Ramaraju in this massive film which is set in the backdrop of the pre-Independence era. Senthil Kumar is the director of photography while Sabu Cyril is the production designer.