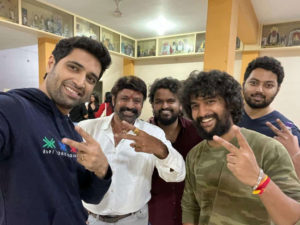 The team of ‘HIT 2’ are on cloud nine with the positive response they managed to get from the morning shows. The collections during the first weekend are also going to be good since there were houseful boards in many theatres. The makers promoted the film quite aggressively prior to its release and they haven’t stopped it after its release as well.

They organized a special screening for Nandamuri Balakrishna and he immensely liked the movie. The ‘Simha’ star was accompanied by his son Mokshagnya who is expected to enter the film industry soon. The picture of producer Nani, Balakrishna, Mokshagnya, Adivi Sesh and director Sailesh Kolanu posing together is doing rounds on social media.

Balayya loved the film and drew similarities between this film’s story and the serial killing by a psycho killer which happened in the USA back in the 70s. While their chat, Sesh put forward the idea of Balakrishna entering the HIT universe and the senior hero did not give a definitive answer and left everyone guessing. With Nani becoming the hero of ‘HIT 3’, people are loving the idea of Balakrishna becoming the hero of ‘HIT 4’ and solving a serious case in his own style.

Prashanti Tipirneni is the producer of this franchise. The arresting background score is composed by John Stewart Eduri. Natural Star Nani presented this movie under Wall Poster Cinema banner. Sunil Rodrigues, Venkat, Naba, and Real Sathish have choreographed the action sequences. Meenakshi Chaudhary, Rao Ramesh, and others are part of the cast. The first part had Vishwak Sen playing the lead role. The third case is expected to release in 2023.