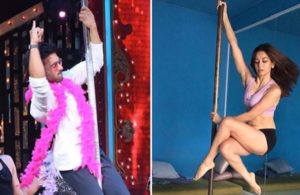 Kriti Kharbanda has shared pictures of herself and rumoured beau Pulkit Samrat, where both are seen trying out pole dancing, and we bet the actress is looking super-hot and sexy!

The actress took to Instagram on Saturday to share two separate photos of her and Pulkit doing pole dance.

“Who does it better!!! Chanduuuuu.. tell tell! @pulkitsamrat #pagalpanti #chaandjaan #poledancing #goals,” she captioned her post.

During a recent interview with IANS, Kriti had opened up about Pulkit, saying: “We even complete each other’s sentences while talking. I know what he is thinking. We have connected so much and had a lot of conversation. I think we have come to a point where we don’t need to say anything to each other. We both know what the other one is thinking. He has changed drastically in the last one year and I am in awe. I am so impressed with the way he carries himself, the way he conducts himself and the respect he has for his co-actors and seniors. I know he is a good person and he is here to stay.”

“Pagalpanti” is all set to hit theatres on November 22.