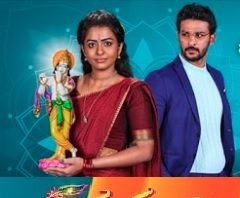 Megastar Chiranjeevi and Salman Khan are two big superstars in their respective industries. The stars enjoy superstardom and their films see good collections at the box office. In a few days, we will see both stars together on the silver screen. It is known that Salman Khan is playing a cameo in Megastar’s upcoming film GodFather.

The makers of GodFather are not leaving any stone unturned to promote the film. Salman Khan is also doing his part in promoting the film. The Hindi trailer was launched in Mumbai the other day and the event was held in a big way.

During the media interaction, Salman Khan made a big announcement and clarified that Ram Charan is playing a cameo. Salman Khan cleared all the doubts about Ram Charan’s cameo. When the media asked Salman Khan about this, he was stunned at first.

Revealing more details, Salman Khan said that, when he and Venkatesh were preparing for a dance sequence, Ram Charan reached the sets and told him that he wants to be a part of the film and he brought his costumes and caravan to the sets.

â€œHe came to see me and he said ‘I want to do this.’ I said no-no. He said I want to be with you in the same frame. I thought he was just kidding. I said we will talk about this tomorrow. Tomorrow he got his van, he got his costume. He was there before us. So I asked what are you doing? He said I just want to be here,â€ Salman Khan said.

It appears like Ram Charan showed his gratitude to Salman Khan for the help he did to his dad Chiranjeevi. Without any doubt, Salman Khan’s cameo is one of the big reasons behind the good buzz for GodFather. Due to Salman Khan’s presence, the film is having a Hindi release and the film has the chance to get decent collections as the film is hitting the theatres for the Dasara season.

Victory Venkatesh is already doing a cameo in Kisi Ka Bhai Kisi Ki Jaan and Ram Charan’s presence will surely bring a big advantage to the film. As Salman Khan did his best in playing a cameo without charging a penny reportedly, Ram Charan played a cameo.