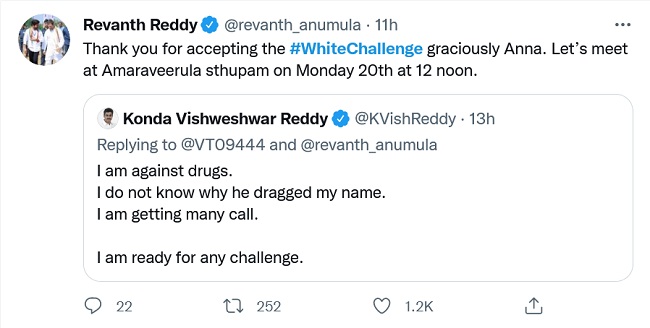 The politics in Telangana are revolving around drugs and drug abuse. The opposition parties are cornering the ruling TRS claiming that a few members of the party including IT Minister KTR were also part of the drugs racket. Taking a step ahead, TPCC chief Revanth Reddy had started a new challenge named While Challenge.

The new challenge started by Revanth Reddy aims at encouraging politicians and celebrities to take up the drug analysis test. Once the test reports are issued the same would be uploaded on public platforms. KTR and former MP Konda Vishveshwar Reddy were nominated by Revanth Reddy under the White Challenge.

Konda Vishveshwar Reddy had reacted to the challenge posed by Revanth Reddy and expressed his shock over his name being dragged into the drugs racket. He said he is ready to take up the challenge.

Reacting to the same, Revanth Reddy thanked Konda and said let us meet near the Telangana Martyrs Memorial on September 20 at 12 noon. The former Minister became the first person to accept the White Challenge.

“I am against drugs. I do not know why he dragged my name. I am getting many call. I am ready for any challenge,” Konda Vishveshwar Reddy said in a tweet.