Advertisement
Home International We know exactly who he is, Trump tweets 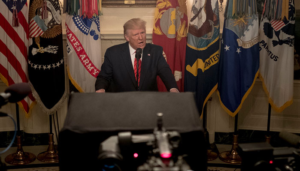 After two days of Baghdadi attack by the US-led commando raid, the ISIS group released an audio recording that they have come up with a new leader, Abu Ibrahim al-Hashimi al-Quraishi. The group also confirmed the death of their former leader Abu Bakr al-Baghdadi and warned the US to not be happy over the attack.

But, people have contemplated that the new leader is not a known face and his identity has not been disclosed. However, President Donald Trump said that the United States knows who the Islamic State group’s new leader is. “ISIS has a new leader. We know exactly who he is!” Trump said in a surprise tweet.

After Baghdadi’s death, who led ISIS since 2014, the group agreed on a replacement. Baghdadi was the world’s most wanted man and he died in a US special forces raid in Syria’s northwestern province of Idlib on Sunday. The US also stated that Baghdadi’s death is a great victory and not a threat. But one should not forget that the fight with ISIS is not over.