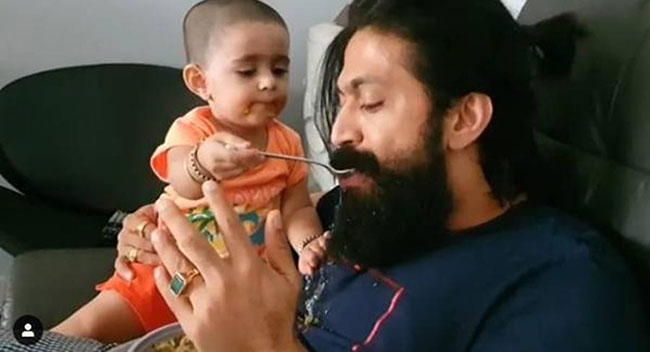 Pan India Star Yash has shared an adorable video of him spending time with his two-year-old daughter Arya. Now, this video has undoubtedly become viral where Yash had completely surrendered himself to his tiny tot.
While Yash tried to feed this little doll, she took the spoon from his hands and started feeding him. While she was doing this, the food has spilt all over his beard and t-shirt.

Yash obliged to her demands and allowed her to do as she wanted. This made him to write “And I surrender. P.S. Perks of home quarantine. My T-shirt doesn’t agree though.” as a caption to the video.

This video touched many people as the father-daughter duo is very adorable to watch. On the film front, Yash’s massive project ‘KGF 2’ is stalled due to the ongoing outbreak.

And i surrender…❤ P.S " Perks of home quarantine " my t'shirt doesn't agree though 😜 Stay safe everyone 🤗