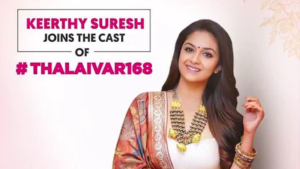 Ever since her films with Danush, Surya and Vijay didn’t do as expected, Malayalam beauty Keerthy Suresh has slowed down in Tamil industry. At the same time, though Mahanati is such a stupendous hit, she is making her moves quite choosily in Tollywood. But here’s the shocker.

Joining the likes of an Aishwarya Rai and Nayantara, now Keerthy Suresh has accepted a Superstar Rajnikanth film. She is not playing any side character here, but she will be seen as the leading lady of the movie. Though the ‘Nenu Sailaja’ actress has earlier rejected some Telugu senior heroes, it looks like the 27-year-old actress has no qualms doing a heroine to 68-year-old superstar.

“Extremely happy to announce this magical milestone in my journey From being awestruck of Rajnikanth sir to sharing screen space with him will be my most cherished memory in my life,” she said, thanking director Siva who is going to handle the mass project #Thalaivar168.

On the other hand, Keerthy Suresh will be seen in low-budgeted Telugu film “Miss India” and also she has Nagesh Kukunoor’s “Good Luck Sakhi” in hand.