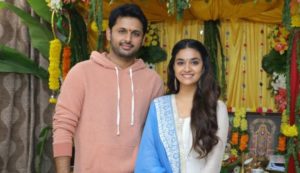 Young hero Nithiin after series of flops bounced back with the film Bheeshma. The film which is a complete entertainer impressed audience big time. Though released in off season the film managed to bring in profits for the distributors and exhibitors.

After Bheeshma, Nithiin is busy with another romantic entertainer Rang De. The film is being directed by Venky Atluri and produced by Sithara Entertainments which produced Bheeshma too. Keerthy Suresh is romancing Nithiin in the movie.

According to the latest update, Keerthy Suresh is going to pair up with Nithiin again. It is known that the young hero is going to work with his friend and director Krishna Chaitanya for the flick Power Peta. It will be two film series which will start next year. According to the latest update Keerthy Suresh was approached to play the female lead. The actress however has to give her nod for this flick.

Few days back, Keerthy Suresh name was rumored for wrong reasons as she is getting married. The actress has however condemned the rumors as baseless.