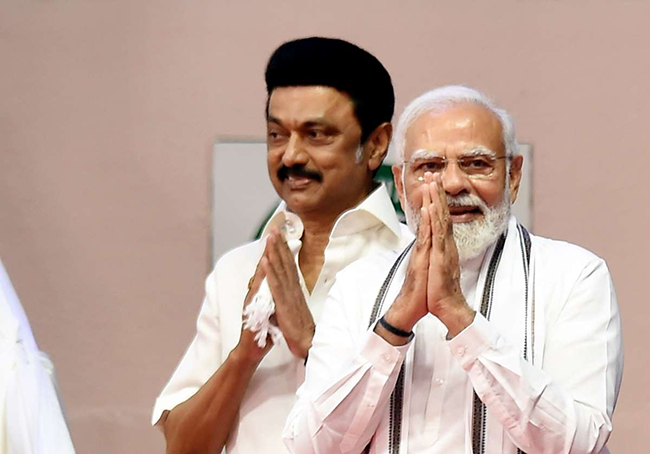 Who was the better of the two in taking on Prime Minister Narendra Modi – Telangana CM KCR or Tamil Nadu CM MK Stalin? The comparison has become inevitable as the two chief ministers have adopted two totally different ways to attack the Prime Minister. The unanimous opinion is that Tamil Nadu CM Stalin has clearly scored over supposedly foxy politician KCR.

KCR left on a tour of Karnataka to meet former PM HD Devegowda and former chief minister HD Kumaraswamy. What did KCR achieve from this meeting? The Janata Dal does not have even a single MP in Lok Sabha and less than 25 MLAs in Karnataka assembly. What more? The party is on the wane and is constantly on the decline with its base continuously shrinking. The party has literally no role to play in national politics.

By going away from Telangana, KCR has lost an opportunity to raise issues pestering the state. Also, when Modi attacked the TRS, both KCR and KTR are out of station. The party had to deploy Harish Rao to defend the TRS.The BJP social media has created an impression that the TRS chief “ran away” from the state when Modi came. They have even used the rain in the evening to their advantage. The BJP social media groups said that when Modi came, there were welcome showers, while the rain gods were happy once KCR left the state.

On the other hand, Stalin not only welcomed Narendra Modi, but took the opportunity to put forth demands to the Central Government. Thus, he projected himself as a caring and concerned chief minister and also an uncompromising leader of the Tamils. He also made Modi talk about the greatness of Tamil language especially in view of Amit Shah’s recent pro-Hindi comments. Thus Stalin clearly achieved what KCR failed to.