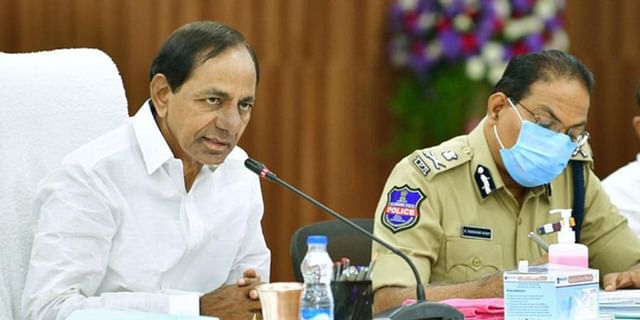 HYDERABAD: “Alarm bells are ringing. You have to consider it (drugs issue) seriously and act immediately,” Chief Minister K Chandrasekhar Rao instructed the officials of excise and police departments during a review meeting on transport and consumption of ganja, held at Pragathi Bhavan on Wednesday.

“I am holding this meeting with a lot of anguish. The reports that I am receiving say that the misguided youth have created WhatsApp groups, sharing messages on supply and consumption of ganja. Innocent youth are falling prey to the ganja peddlers. You should understand the seriousness of the problem. At present, the situation is controllable. If we neglect the issue, it will become uncontrollable,” Rao said.

The Chief Minister said that youth will become mentally deranged due to continuous use of drugs and there is a high risk of such youngsters dying by suicide. Stressing the need to keep a vigil on educational institutions and increase the number of check posts at State borders to curb smuggling of ganja into Telangana, the Chief Minister asked the officials to “deal with ganja mafia with an iron fist.”

He asked the officials of police and excise departments to intensify their efforts and free the State from the clutches of drugs. Rao also directed them to declare a war against the cultivation and consumption of ganja (cannabis). “There are reports that use of ganja is on the rise in the State. There is a need to declare war against it. Prepare an action plan to end the cultivation of ganja before it takes serious proportions,” he said.

“When the State is progressing well in all spheres, we should not allow ganja and other drugs to tarnish its image. The strides made in ensuring all-round development will become infructuous if the State does not take steps to eradicate the contraband,” he said.

The Chief Minister also asked the officials to create a special cell and appoint an officer of Director General (DG) rank to curb the illegal ganja business. “Flying squads to raid ganja farms should be fortified. A special cell should be created in the Intelligence Wing to monitor the progress in eradicating the evil. The official who succeed in curbing ganja farming should get cash rewards, special promotions and similar incentives. The officials should study the methods employed by other states which were successful in eradicating this evil,” he said.Expressing concern over increase in gambling and sale of ‘gudumba’, he said that effective measures should be in place to control these evils.

Meanwhile, officials informed the CM that the ganja production was taking place at Andhra-Odisha border. From there, it is being transported into the State from Chintur via Bhadrachalam. From Telangana, it is being transported to Maharashtra and Karnataka, the officials said while expressing the view that there should be a co-ordination with officials of other states to stop transport of ganja. Chief Secretary Somesh Kumar and DGP M Mahender Reddy were present on the occasion.

Ganja cultivators to be punished

Ganja consumption among youth, coolies and hamalis
Rythu Bandhu and Rythu Bima to be cancelled if farmers cultivate ganja
If tribals are cultivating ganja, their pattas will be cancelled
Alternative employment for ‘gudumba’ traders
Special advocates for speedy trial of ganja cases
Lessons to be included in textbooks on the dangers of use of intoxicants
Subsidies to be given to film-makers who highlight the evil effects of drugs