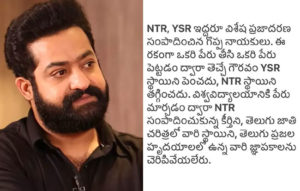 Andhra Pradesh Chief Minister YS Jagan Mohan Reddy’s decision to rename the NTR Health University after YSR turned out as a big controversy. The opposition Telugu Desam Party is opposing this severely and asked how the ruling party can change the name. The opposition party leaders are still protesting for this.

Since yesterday, Nandamuri scion Taraka Rama Rao aka Jr NTR is missing from action. Nandamuri fans and Telugu Desam Party supporters have been waiting to see how Tarak will react to the issue. The RRR hero finally got the time to react to the development.

NTR gave a normal response and he made sure that he won’t target anyone aggressively. Calling both YSR and NTR great leaders, Jr NTR said changing the name of one leader and giving another name will not decrease the level of one leader and increase others’ level.

After giving a lukewarm response, NTR opined that changing the name of the University cannot remove the special space he has in the hearts of Telugu people.

Nandamuri fans and TDP supporters hoped that NTR would give an aggressive reaction. But NTR did not do that and gave a simple reaction. This is not the first time, NTR gave a casual reaction concerning the Nandamuri Family. When the YSRCP members reportedly used objectionable comments toward Chandrababu Naidu’s wife, NTR said passing such comments toward women is not a good thing and said it is not Telugu culture. He did not take any names while talking about this.

Young Tiger NTR is the new member of the Nandamuri family to react to the issue. Earlier, on the behalf of the Nandamuri Family, NT Rama Rao’s son, Nandamuri Ramakrishna condemned the development and said the family is not at all happy with what is happening in the state as far as the change in the University is concerned.

The Nandamuri family said that the late NTR is the pride of the Telugu community, and changing the name of the NTR University of Health Sciences will be a disrespect to the community. Having said that, the family urged the Andhra Pradesh government to not go ahead with the decision.