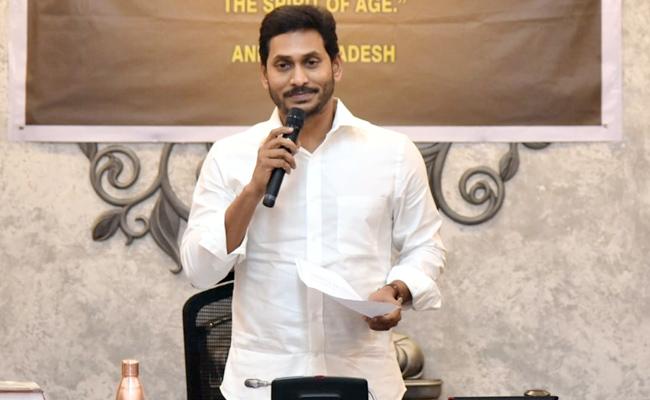 It has been six months since YSR Congress party president Y S Jagan Mohan Reddy took over as the chief minister of Andhra Pradesh and he has already shown his mark on the state administration.

However, Jagan has realised that the district administration has not been in tune with his thinking of bringing governance close to the people. So, a day after completing six months in office, Jagan made a quick review of the functioning of the administration by holding a meeting with collectors and gave a fresh set of guidelines to them.

Naturally, Jagan giving his piece of mind to the collectors has become a lead story for the major Telugu dailies in Andhra Pradesh on Monday.

Sakshi carried a banner story on how Jagan asked the Collectors to stop wasting on video conferences and teleconferences but focus on field level inspections. He asked them to be on the field for 15 days a month, sleep in the villages and get closer to the people.

Eenadu also carried it as a second lead story, highlighting Jagan’s dissatisfaction over the Collectors’ callous attitude. It quoted Jagan as saying that the Collectors should change their attitude and be on the field for 15 days a month.

Andhra Jyothy, as usual, took a negative stand and sought to attack the Collectors for blindly following the instructions of the government and becoming puppets in the hands of the ruling YSR Congress party. It alleged that the Collectors were interested more in publicity than the field work.

Known for its own style of reporting, Eenadu carried a flyer on growing atrocities of women across the country in general and Telugu states in particular, but poor record of awarding sentencing the accused in the rapes and killings of women.

Alongside of this report, the daily carried the day’s developments on Hyderabad veterinarian murder case which evoked nation-wide outrage. Such reports will definitely attract more readership.

Eenadu’s first lead story is on Andhra Pradesh high court chief justice Jitendra Kumar Maheshwari’s speech at the state judicial officers’ conference at Acharya Nagarjuna University campus in Guntur, highlighting the need to dispose of cases quickly to restore the confidence of the people on the judiciary.

It also carried another special story on how families living under a bridge in Vijayawada. A human interesting story that will have good readership.

Sakshi carried a second lead report on the state government’s latest health initiative – YSR Arogya Aasara, a revamped Arogya Sri programme which has been under implementation for over a decade.

Interestingly, the state government issued a full-page jacket advertisement to Eenadu but only a half-page ad to Sakshi, despite it being Jagan’s own venture. As usual, Andhra Jyothy did not get the ad.

Tirumala Tirupati Devasthanam trust board chairman Y V Subba Reddy’s rejoinder on the allegations of Jesus Christ name popping up in the TTD weblink was also prominently carried by the media on Monday.

Reddy clarified that the TTD website doesn’t have any such mention of Jesus and only Google link mentions that on which an enquiry would be ordered.

Otherwise, there are no other major controversial reports in the Telugu media on Monday.