Advertisement
Home News When Jagan found fault with his own paper! 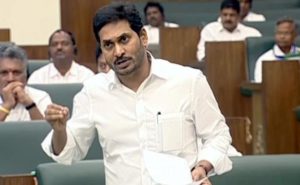 When YSR Congress party president and Andhra Pradesh chief minister Y S Jagan Mohan Reddy found fault with his own newspaper Sakshi openly in the state assembly for wrong reporting, it naturally becomes a big news for the rival papers.

That is what Eenadu and Andhra Jyothy did on Wednesday. The chief minister’s statement that his government had never made any promise to supply “sanna biyyam” (fine rice) through fair price shops and that Sakshi had wrongly reported has become a headline for both the dailies.

Eenadu even highlighted the fact that Jagan had displayed the clipping of ETV in the assembly to nail Sakshi, while Andhra Jyothy prominently mentioned his statement that “Sakshi had wrongly reported.”

As a matter of fact, both Eenadu and Andhra Jyothy also carried the reports originally, quoting civil supplies minister Kodali Nani’s press conference that the state government would supply “sanna biyyam” to the consumers. Later, ETV carried a follow-up report that it was Swarna variety of rice.

But when the debate was going on in the assembly, the authorities apparently misled the chief minister that only Sakshi had reported on supply of fine rice and showed Eenadu clipping carrying the follow-up report about supply of Swarna type of rice.

At the end of the day, the debate projected not only the Jagan government, but also Sakshi daily in bad light. However, Sakshi did not highlight Jagan’s comment on its error in reporting.

The debate over Rythu Bharosa, onion supply and challenges and counter-challenges over Heritage Fresh also made it to headlines on the front pages of the three major Telugu dailies. Andhra Jyothy projected Naidu’s challenge to the government on Heritage Fresh, Sakshi sought to highlight how the TDP and Naidu had beaten a retreat when the government put forth the facts before the House.

The increase of Andhra Pradesh State Road Transport Corporation (APSRTC) bus fares with effect from today was prominently highlighted by Eenadu and Andhra Jyothy, to convey the message that the decision is going to cause huge burden on the consumers. Andhra Jyothy made it a banner story and Eenadu carried it at the bottom; Sakshi ignored it for its own reasons.

The introduction of Citizen’s Amendment Bill in Rajya Sabha, amidst nationwide protests, is yet another story that hit the headlines in the front pages of all the three dailies. Eenadu made it as a second lead story highlighting the protests.

The flyer story carried by Sakshi on the anguish expressed by President of India Ramnath Kovind over growing atrocities on women is a thought-provoking report. Alongside, the daily also carried a curtain raiser on the proposed bill to be introduced by the YSR Congress party government in Andhra assembly to fast track the trial of the rape cases.

The anchor story of Sakshi is also a very interesting one – it is on increasing pollution of all major rivers in the Telugu states, including Godavari and Krishna. Such stories will definitely increase the credibility of the paper.

On the other hand, Andhra Jyothy carried a special report on fake websites of prominent temples which are looting people.

The debate in the AP legislative council over continuing of Telugu medium in government schools is yet another report that appeared only in anti-establishment papers. As expected, Sakshi pushed it to inside pages.