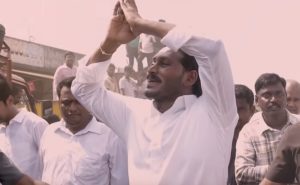 YSR Congress party president Y S Jaganmohan Reddy will take oath as the new chief minister of Andhra Pradesh at 12.23 pm on May 30.

This was officially confirmed by the party in a communication to Governor E S L Narasimhan on Saturday.

Jagan met the Governor at Raj Bhavan at 4.30 pm and staked claim to form government in Andhra Pradesh.

While congratulating the YSRC president for his resounding victory, the Governor formally invited him to form the government.

Narasimhan instructed the officials to make arrangements for the swearing-in ceremony at Indira Gandhi Municipal Stadium in Vijayawada at 12.23 pm on May 30.

For now, only Jagan will take oath and he will expand his cabinet later, most probably after a week.

At least 20,000 people are expected to turn up for the swearing-in ceremony from all parts of the state. Massive arrangements are being made for them, especially in the wake of severe summer.