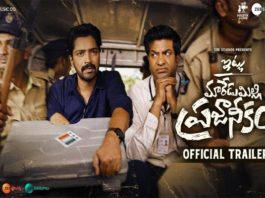 Allari Naresh, known for comedy films, moved away from comedy genre and turned to off-beat stories. He won good name with his previous film, Naandhi. In a similar fashion, he did “Itlu Maredumilli Prajaneekam”.

Story:
Srinivas Sripada (Allari Naresh) teaches Telugu at a government school. He is assigned to an election job in a remote tribal village Maredumilli in Andhra Pradesh with another teacher (Vennela Kishore).

The villagers are impoverished because there is no hospital, no school, and no bridge to cross the ever-flowing river. They decide to boycott elections because they are fed up with the government’s inaction.

How does Srinivas Sripada persuade the villagers to vote and devise a strategy to get their problems addressed by the government?

Artistes’ Performances:
Allari Naresh immerses himself in his character. This is not a difficult role to play; the actor must be natural. Naresh excels at this.

Anandhi is just another village belle. She doesn’t have much substance aside from the opening sequences.

Praveen and Vennela Kishore provide some comic relief. Sampath makes his presence known as a collector. Shritej is fine.

Abburi Ravi’s dialogues about the government system, particularly the dialogue about Teacher’s Day, are worth noting. Music is ineffective.

Highlights:
Message of the story
Couple of sequences

Drawback:
No grip on narrative
Lack of excitement
Superficial scenes

Analysis
Even in areas where insurgency is at its peak, elections are held without any trouble. That is the beauty of Indian democracy and the electoral system. To conduct elections, the Election Commission of India and its officers travel to remote locations and hike hills. Such an incident occurs in the village in “Itlu Maredumilli Prajaneekam.”

The story begins when the collector of the district instructs his officers to get 100% of the vote this time. As a result, the protagonist travels to a tribal region, and the drama begins. The first sequences show the hero and his friend struggling to reach the village and convincing the villagers to vote. So, the majority of the first half of the film is dull.

The film becomes interesting when the hero is kidnapped and the villagers devise a plan to communicate with the government. This isn’t the true twist. There’s another. This middle section of the nearly two and a half hour film is engaging because of its twist.

However, the film returns to its usual mode. Following that, every scene suffers from a lack of emotion and engagement. It further gets bore due to its predictable nature.

The story’s biggest flaw is that it doesn’t know who the villain is. At one point, the film attempts to portray the district collector as the antagonist. But would a collector who won the President’s Medal and is an idealistic person to hold 100% voting be so indifferent to tribal people? This lack of clarity in the director’s writing renders the proceedings uninvolved.

Despite its positive message, “Itlu Maredumilli Prajaneekam” is not an engaging watch. Political naivety plagues the film. Such stories require a more gripping screenplay as well as a high emotional quotient. This is lacking in them.