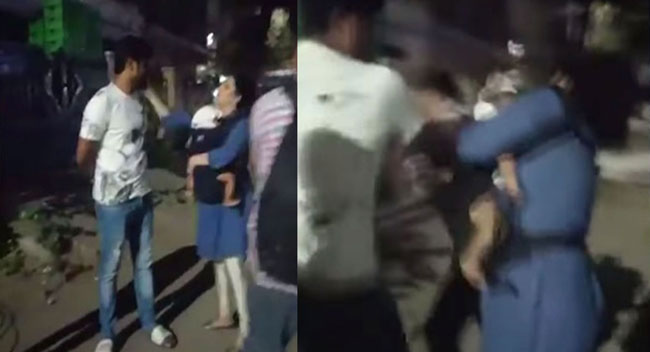 The popular concept of prank videos had entered the southern states as well and a few dedicated YouTube channels do prank videos providing entertainment to the viewers. However, the videos sometimes go out of hand and land in controversy like we have seen in Tollywood hero Vishwak Sen’s issue. The prank video he pulled of did not go well with many and the video had placed him against a leading new channel.

While we are yet to forget the Vishwak Sen issue, another such incident happened where a Tollywood character artist and a YouTuber indulged in a fight. The viral videos show that the duo attacked and slapped each other. A prank video is said to be the reason behind the fight.

After Karate Kalyani asked the YouTuber to not do prank videos as women don’t feel comfortable with the videos. With the YouTuber hitting back, things escalated quickly and led to an argument followed by an attack and counterattack.

As people are talking about the video now, many wonder if the incident is also a scripted one and just to stay in the middle of the headlines the issue might have been created. Most of the people who watched the videos had the same doubt if the video is scripted.

The concept of the scripted videos which was brought to the north from the western countries is that people who do the videos will get fame and name. The more sensational videos are, the more the video gets highlighted. The way Karate Kalyani fought with Srikanth Reddy without complaining to the Police added fuel to the opinion of scripted videos.

Karate Kalyani has a history of making sensational comments to hit the headlines. Earlier, she had alleged that a Hindu outfit that had collected donations to set up an office had done a few irregularities in dealing with the funds collected.

In the past, she faced severe allegations that she tried to distort the evidence in connection with a murder case. A few cops reportedly accused Karate Kalyani of allegedly trying to tamper with the pieces of evidence that were gathered in a murder case.