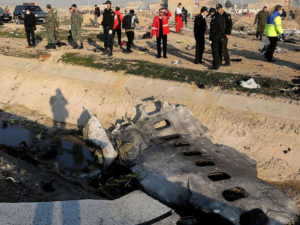 Clearing the air and putting an end to speculations, Iran finally admitted it shot down the Ukrainian plane unintentionally, blaming human error.

Ukrainian airliner crashed near Tehran airport minutes after it took and some videos show it being shot in the air. Iran initially denied claims by the Boeing company that the airliner was put down by Iranian missile attack, but now came out admitting it happened by mistake.

Brig, gen Amir Ali Hajizadeh of Iran revolutionary Aerospace force commander explained that a junior officer made a mistake, as they were told to fire at the US warplanes and they were not asked to seek senior commanders’ permission at that instance.

Iran president supreme Hassan Rouhani officially admitted that human error caused the horrific crash of the Ukrainian plane and death of 176 innocent people. He mentioned it a ‘great tragedy’ and ‘unforgivable mistake’.

Ukrainian President Volodymmyr Zelensky demanded an official apology by Iran through diplomatic channels. In his statement, Mr Zelensky said, they expect Iran assurances of a full and open investigation, bringing those responsible to the justice, the return of the bodies of the dead and also the payment of compensation.

The US intelligence, also the president Donald Trump earlier left hints on Iran could have shot down the Ukrainian plane by mistake.

Protests erupted all over Iran after the Iran’s revolutionary guards take full responsibility for shooting down Ukrainian flight 752. The hundreds of protestors demand a trial, resignations won’t be enough.